The Ash Statues (by Scott Perry, edited by Brannon Hollingsworth)

The following story was lanned by Sydney Silamander, managing editor of The Lady's Sharper Eye, through a contact at the Citadel of Chiselled Enlightenment. The individuals contained within this story have been verified through sources of Ashenbach, owner and publisher of The Eye. However, the validity of the story is left to the determination of the reader. Please enjoy its content or, should you believe the story to be of a true nature, heed its warning.

"The light from my stone was running out. I had lost my way after departing from the Crumbling Citadel. The portal I was trying to reach in the Core had alluded me and I guess I had stumbled into the Sparkling Vast. Travelling through any of the Inner Planes is nowhere near easy, even for a member of the Doomguard. I wasn't sure how much further I could go. That's when I saw them, standing like eerie silent pillars before me, the ash statues. These statues were unlike any that I had ever seen. The detail and design appeared to be extraordinary. Then I remembered the stories that the Vast contained an area that would harden any moving object and had frozen many lost sods. I suddenly felt so cold that I thought my protection had failed me, but it was only raw fear gripping my bones. The Vast has been reported by greybeards as a region of splintered glass that sparkles and gleams brilliantly when exposed to light, but I never believed the stories of a field of ghostly statues. I might have still not believed once I saw them, if one hadn't spoken to me.

"The statue that spoke to me was a bariaur, or at least it had been before its transformation. The bariaur now stood still as a grey sculpture made of solid ash, but the voice that echoed within my brain-box was alive enough. The field, like its otherworldly occupants, appeared to be devoid of all life - except that the eyes of the statues had retained their colour and still glistened with some form of basal essence. The bariaur had hard, black eyes that glittered like twin onyxes on its flat grey face. Its lips did not move, but its voice, growing clearer as I approached it, was still within my head. The poor sod was sobbing and crying. I called out to it in my mind, "Who are you?" The answer was short and soft, "My name is A'ram of the Steelwool clan." I wasn't sure if my mind had begun to decay or if this ash statue had actually answered me. Since I doubted I could find my way to the Core and had no hope of returning to the Crumbling Citadel, I decided my best chance of giving this place the laugh was to continue the conversation before the blowing ash put me in the dead-book.

"The bariaur turned out to be quite friendly, if not a little barmy. A'ram had been frozen here over a hundred cycles, since before the beginning of Hashkar's reign in Sigil. He was very pleased to see me, as apparently the ash statues can only speak to unfrozen souls and then only to one at a time. So even though we were surrounded by hundreds of these "living" statues, the poor sod was as lonely as a Signer in a Bleaker's cell. I lanned all sorts of darks about how he had come to be here and where he had been going, but he mainly wanted to discuss my journey. He seemed to thrive on chant from the Outside, as he called it, and was most inquisitive as to my recent origins and intended destination. Standing in the quickly piling ash, I quickly grew colder and weaker. I decided that I had to move our conversation along. I asked A'ram how the statues are formed and was there any way off of Ash in this region. He explained to me that the statues were formed by the removal of all heat by the Ash and the emptiness imposed by Vacuum so that only the soul remains, helplessly trapped inside a frozen body. I felt terribly sad for this honourable bariaur, member of a vibrant and joyous race. To be robbed of the movement and vibrancy of life, for him, was unthinkable.

"After revealing how the statues come to be, the bariaur told me that I still had a chance to survive and escape the Ash. He described the location of a secret portal, which would take me to the elemental plane of Earth. Seeing as I had a better chance for survival on Earth than Ash, I began looking through the macabre, silent field for the portal. A'ram told me that the portal was near the field of statues and would be recognised as five ash-dried bones lain in the form of a circle. Somehow the ash would never cover the bones from sight. The portal would only activate if a person declared their love for Ash. I figured this as quite unusual, but beggars can't be choosy, especially when my zone of breathable air had almost run out. I found the portal about 100 yards from A'ram. I marked it with my pack and quickly returned to A'ram to say my farewells. As I turned to leave him, he asked me to free him. I fully understood his meaning and with a slash of my sword his imprisonment was ended. His soul was freed from its timeless cage. I wished that I had time for the others, but my pack would soon disappear, covered by the quickly falling ash. I ran for the portal, began yelling my love for Ash, and jumped into the circle of bones, hoping that the portal key hadn't changed. My surroundings blurred and I became ill. I couldn't focus my eyes and fortunately slid into the blissful arms of unconsciousness. 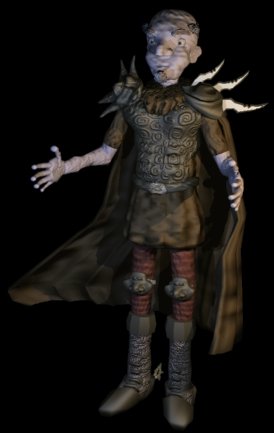 "I awoke to find that my trip had ended successfully. I found myself lying upon a bed of marble at the Citadel of Chiselled Enlightenment, on the elemental plane of earth. The cleric attending me indicated that the Citadel was an institution of knowledge and wisdom. My body felt cold and stiff, I assumed from the flaying of my skin by the ash. However, the cleric indicated that she had attempted to heal my wounds, but had been unsuccessful. It seemed that something was blocking my recovery. She told me to rest and see if my condition would improve. But I felt like I was growing colder, even colder than I had been on the Ash.

"Over the next three days I learned what was hampering my recovery. The portal was evidently either cursed or caused strange side affects. I briefly wondered if A'ram knew the portal was corrupted. Regardless, my guess is that the moment I stepped into the portal, a transformation began. My legs were the first to be affected. I found that I could no longer stand, for my feet had turned the colour of grey ash and would not move. The condition continued to move slowly up my body. It was only a matter of time before it would reach my chest and I would be no more. I didn't know if my soul would stay in my body like A'ram. Since my time was growing short I told my story of the ash statues to the cleric that attended me. She wrote my words carefully and told me that I would be remembered. On the morning of the third day, my chest grew very heavy and then everything faded to black."

-- Transcript of the traveller Nezor Deird as recorded by Vaka Tomebinder, elementalist sage and High Scrivener, of the Citadel of Chiselled Enlightenment.

[Clerical note: Once the transformation of Nezor Deird was completed to a statue of ash, contact could not be established with him of any kind. It was debated whether his statue should be destroyed to possibly release him just as he released the bariaur A'ram Steelwool. It was decided that his statue would remain, because as his body froze his face was smiling. His statue remains at the Citadel today as a testament of his journey.]